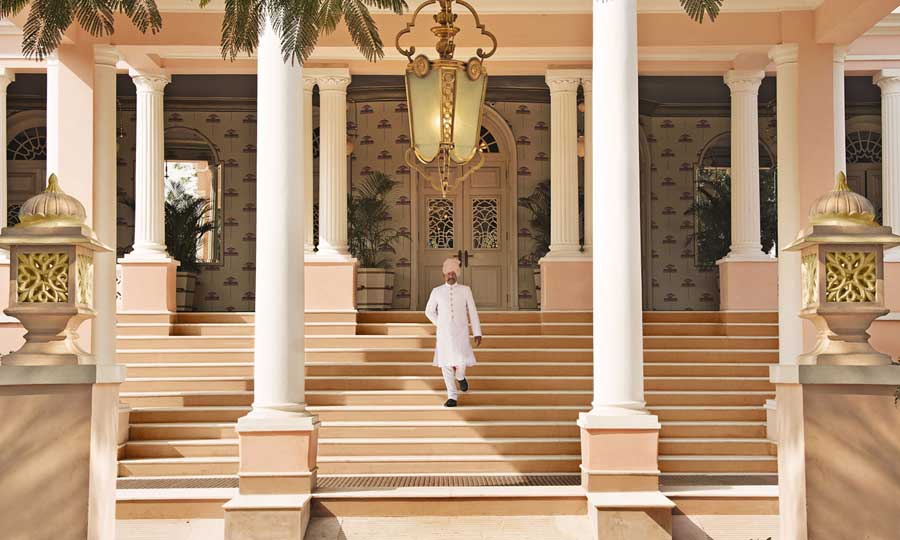 I was supposed to stay at SUJAN Rajmahal Palace during my first trip to Jaipur and India earlier this year. However, it was fully booked at the time which isn’t surprising considering it only has 14 rooms. Fast forward a couple of months and I was on my second trip to India with the plan to see more of Rajasthan this time as opposed to the hectic 2 days I spent earlier this year.

Upon my arrival at the hotel, I saw a photography team there for a photoshoot and their subject was a young man who I was later told is in fact the maharaja of Jaipur and the owner of the hotel — pretty cool eh?!

Despite having 14 rooms only, the hotel has 4 food and beverage outlets which are lavishly decorated to fit every Instagram whim you’ve ever had. The rooms are similarly decorated with varying patterns for every room, and that transfer you instantly to a world of royalty and opulence. I stayed at the Princess of Wales suite in which the late Princess Diana once stayed. Other distinguished guests of the hotel/palace include Her Majesty Queen Elizabeth II and HRH The Duke of Edinburgh, as well as several other members of the British Royal Family, and eminent international celebrities such as Jackie Kennedy, Lord and Lady Mountbatten, and the Shah of Iran.

Can we take a moment to discuss how beautiful this Princess Of Wales suite at @sujanluxury is? Never in a million years would I have thought I’d stay in the same room as Princess Diana, and I am now more excited to discover more of @sujanluxury properties around India someday 🇮🇳 #hotelsbygmr83

Breakfast is a royal affair at SUJAN Rajmahal Palace which matches the settings. You get your fruits, bread basket, coffee/tea, and then choose from a set menu of hot meals like eggs cooked in different ways as well as a couple of Indian breakfast options. Everything I had was excellent especially the scones!

Tea time is complimentary at SUJAN Rajmahal Palace and I highly recommend it. They have an excellent selection of teas that come with small sweet and savory bites. The mini sandwiches can be improved upon, I think, but the sweet bites were divine.

Speaking of complimentary, laundry is also for free at the hotel which was great if, like me, Jaipur was the last stop in your tour and the road has taken its toll on your clothing.

The staff at SUJAN Rajmahal Palace are impeccable and well trained although it’s obvious that some are more trained than others. They have interesting stories to share so take the time to engage in conversation with them!

Still can’t get over how pretty this hotel is 🇮🇳 #hotelsbygmr83

Although I didn’t use it but the hotel is happy to arrange tours and excursions of Jaipur for you.

All in all, SUJAN Rajmahal Palace is not just a hotel — it is an experience like no other. An experience of royalty, history, and design. It is a feast for the eyes no matter where you look.

To know more about the hotel and Jaipur in general, you can email me at hello@georgerishan.com or check a previous blog post I wrote about the city.